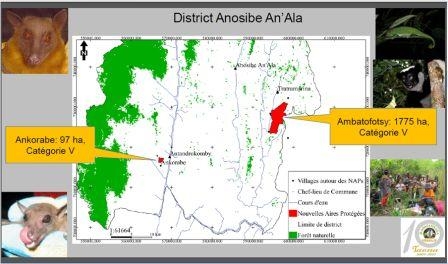 At the very start, Madagasikara Voakajy (MV) used to run researches on species conservation. Madagasikara Voakajy was created in 2005 following two projects on Malagasy species conservation called The Chameleons project in 1998 and the Lamin’Asa Fiarovana Ramanavy sy Fanihy in 2000. Through these works of research, the team had already recommended conservation measures adapted to threatened species. And the Government’s vision to increase the surface of the protected areas to 6 million hectares was the natural issue of these recommendations.

In 2008, MV decided to contribute to the creation of seven new protected areas (NPA) in the Alaotra Mangoro Region, to achieve the country’s challenge to triple the surface of terrestrial protected areas.

After many efforts, the decrees of creation of seven NPAcovering 30823 hectares were finally approved on 2015.

The district is especially known for the conservation of the fruit bat Pteropus rufus. In the South-Western side of the district, we have two NPA, Category V, according to the IUCN Protected Areas Categories System (Mahialambo and Ampananganandehibe-Behasina). Category Vis a protected Landscape/ Seascape. It is a protected area where the interaction of people and nature over time has produced an area of distinct character with significant, ecological, biological, cultural and scenic value, and where safeguarding the integrity of this interaction is vital to protecting and sustaining the area and its associated nature conservation and other values (http://www.iucn.org/about/work/programmes/gpap_home/gpap_quality/gpap_pacategories/gpap_category5/ 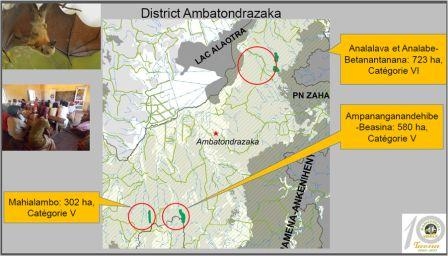 In the North-Eastern side, we have two Category VI NPA (Analalava and Analabe-Betanantanana). Category VI protected areas conserve ecosystems and habitats together with associated cultural values and traditional natural resource management systems. They are generally large, with most of the area in a natural condition, where a proportion is under sustainable natural resource management and where low-level non-industrial use of natural resources compatible with nature conservation is seen as one of the main aims of the area (http://www.iucn.org/about/work/programmes/gpap_home/gpap_quality/gpap_pacategories/gpap_category6/

Mangabe-Ranomena-Sahasarotra NPA, covering 27 346 hectares, is the widest NPA created by MV. This NPA is in the Category VI of IUCN classification. Its emblematic species are the famous golden frog (Mantella aurantiaca) seen nowhere else in the country, the national Indri indri and the Pronk’s day gecko (Phelsuma pronki). 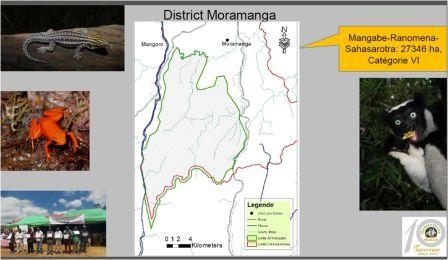 In the boundaries of its two NPA, Anosibe An’Ala hosts many species including the fruit bat Eiodelondupreanum, Indris and the freshly discovered chameleon: Calumma tarzan. The two NPA implemented at this district cover 1605 hectares: in the North-east of the district, there is the NPA of Ambatofotsy (1775 ha), and Ankorabe in the Middle West (97 ha). They are all under the Category V of IUCN classification.

A hard work behind the 7 decrees…

The eco-biological studiesin the species were certainly crucial but that is just a step to the conservation project. In fact, it takes more to accomplish the required actions of conservation. It has more to do with human interactions. The Community team had to consider the livelihood of locally based communities, in a word, the social impacts of the creation of the NPA. They had to make more than 60 public consultations before delimiting the NPA’s boundaries, they faced local conflicts generally about the land use or ownership. And the most hard and boring task was certainly the administrative procedures. Great hard guys!!! You rock!

In the coming 5 years, 5 challenges are targeted to be achieved via the NPAs project: