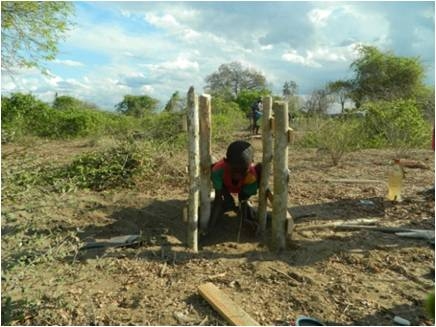 Six of the nine species of baobabs in the world are endemic to Madagascar. Three of them are Endangered according to the IUCN Red List: Grandidier's baobab (Adansonia grandidieri), Perrier's baobab (A. perrieri) and the Diego baobab (A. suarezensis). The first is only found in the western part of Madagascar while the latter two are endemic to the northern tip of the country. Together, they are threatened by low recruitment in the wild. To mitigate this threat, we initiated a program to restore the baobab population in western and northern Madagascar.

We held a meeting with all stakeholders in Morondava to decide where the baobabs should be planted.

264 seedlings of A. grandidieri were planted by 264 children at four primary schools in Mahabo district.

A first monitoring was carried out. The tallest baobab was 46 cm high (planted by pupils from EPP Soatanà). We had to replace 79 seedlings: 8/86 in Mihary, 24/64 in Soatanà, 4/31 in Soamahavelo and 43/80 in Anjatelo. Kids were very proud of their trees.

Teachers and pupils from Mihary and Soamahavelo measured their trees. The height varied from 3.5 to 58 cm.

Representatives of the Ministry of Education in Mahabo (CISCO) and the Ministry of Environment and Forestry (CEF) together with a member of MadagasikaraVoakajy noted the growth of each tree and how well they were looked after. The tallest tree was observed in Mihary with 95 cm high. To protect it from goats and other predators, Bienvenu surrounded his baobab tree with spiny branches of jujube. Now, he will have to protect his tree from the jealousy of other children too!!!

This is not a joke:
In Soatanà (literally meaning nice village), one child whose baobab had been replaced in December was upset when it also died so in February, he replaced it with a mango tree which is now growing well!

Children are smart:
Another child fromMihary planted a seed of baobab in place of the seedling that died. Her baobab is now 40 cm high.

Now:
On your way to Morondava, you can stop in Mahabo and ask for directions to Soatanà or Soamahavelo. Anjatelo and Miharyare on the RN 34. Anjatelo is located in 6km before reaching Mahabo from Ankilizato and Mihary is in the opposite side (after Mahabo) . Look out for the sign on your left, you cannot miss it. Visit the baobabs, meet the children, and tell us what you think!

Communities from the village of Ambodimanary set up the Diego baobab nursery in Andranomanitra. Members of the community agree to collect seeds from the wild and Mr Jaovita Paulin will look after the nursery.

2500 seeds were collected and potted-up and at the end of the month. Some seedlings have reached 10 cm high.

Daudet Andriafidison, Community and Conservation Programme Manager at Madagasikara Voakajy, took a fruit of Diego baobab to our office in Antananarivo.

He planted the 40 seeds in our garden.