On the track of the Angel's chameleon 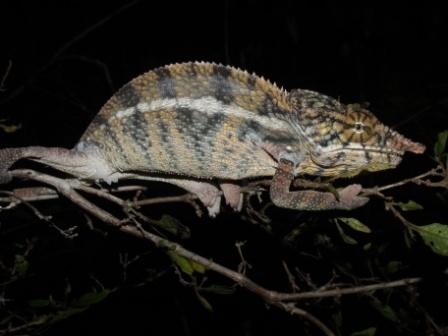 Angel's chameleon, Furcifer angeli is an endemic chameleon of Madagascar. Its distribution is limited to the north-western part of the country. Like most Malagasy chameleon species, international trade of the Angel's chameleon has been suspended for several years, due to lack of proof for its sustainability.

In 2012, the scientific and management authorities of the CITES convention in Madagascar assessed this species as presenting low risk for international trade. In April 2013, a team from Madagasikara Voakajy carried out a fieldwork to assess the population of F. angeli and identify potential sites for the collect. Data collected from this fieldwork will also be used to determine a sustainable quota for this species. Two main areas were visited: Marosely in Sofia Region and Andranomiditra in Boeny Region. Surprise: only 22 individuals were found during a ten nights search in Marosely; no individuals were found after nine nights search in Andranomiditra. What's going on? We are now comparing our results to that of previous years. Habitat preference is also analyzed to review the species' area of occurrence.