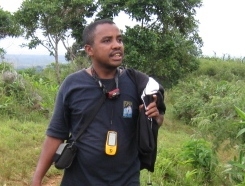 We are pleased to announce that Daudet Andriafidison, Community and Conservation Programme Manager at Madagasikara Voakajy, has been selected among the 19 Disney Worldwide Conservation Hero

. A great thank you to Lubee Bat Conservancy

Daudet is dedicated to bringing local communities, decision makers and biologists together to conserve the unique biodiversity in Madagascar while promoting economic development. He joined the project Bat Conservation Madagascar in 2002 as a research assistant, leading teams in the field, training university students in how to study bats and developing projects on the conservation biology of his favorite species, the Malagasy flying fox (Pteropus rufus). He played a critical role in the creation of Madagasikara Voakajy (MV), an organization that evolved from the original bat conservation project and is now a key member of MV’s leadership team as the manager of the Community and Conservation program.

The Community and Conservation program engages local communities and decision makers to conserve and sustainably use species, habitats and ecosystems, and to ensure they benefit from these actions. This is currently done by creating community-based organizations that will manage a defined biodiversity-rich area. Daudet’s team is working to create these organizations, discuss the conservation and development issues, and plan with them the actions that should be carried out to ensure both conservation and economic development goals. Once the plans have developed, he focuses on raising funds that allow implementation of the agreed actions. Daudet has been excellent in maintaining good relationships with the local and national authorities, and our funders.

As all other bats, the flying fox are generally neglected by the conservation community and by people in general. In Madagascar, the flying fox is a game species that can be hunted between May and October. As a child, Daudet had seen many of these bats sold in the village where he grew up. He has also noticed the progressive diminution in the number of bats in the villages and heard reports about abandoned roosts. He has travelled almost all over Madagascar to see where the bats are and assessed their conservation status. Everywhere he goes, he has to answer the questions: ‘Why are you interested in bats?’ and ‘Can we still hunt bats?’ Proudly and with an engaging manner, Daudet answers by recounting his childhood stories, how he came across the research project as a student, the ecological roles of the flying fox and their conservation status, before ending with the rules about hunting.

Daudet has been working on fruit bats for the past ten years. Many other people in Madagascar have studied bats, but he is one of the few who has made a difference for bat conservation. Thanks to Daudet’s perseverance, MV is the only organization actively promoting fruit bat conservationin Madagascar. Currently, we are creating five new protected areas dedicated to the three Malagasy endemic fruit bats: Pteropus rufus, Eidolon dupreanum and Rousettus madagascariensis. These are small protected areas ranging from 96 to 1,934 hectares. In hotspot countries like Madagascar where most species are forest-dwellers, forest loss is the major threat to biodiversity and forest fragments can provide an oasis for endemic and threatened species. The Malagasy flying fox is one of the best examples of this as it roosts and feeds in forest fragments. Loss of its roosting and feeding habitat is the main cause of this species’ decline.

In Analalava, we have seen an increase in the flying fox colony from 200 individuals in 2006 to nearly 4,000 in 2014. Before 2006, the savanna around the Analalava forest fragment was burnt several times a year, people started converting the wetland within the forest into paddy fields, and nets were permanently installed in the roost for catching the bats. Since his first visit in 2006 and the creation of the new protected area in 2008, Daudet managed to remove the nets from the roost, stop the expansion of rice fields, and engage people to set up firebreaks. Three community-based organizations are in place to ensure the sustainable management of the roost and its surrounding habitat. In addition to patrolling the forest regularly, these communities started restoring the native forest fragment, planting fast-growing trees that will provide fuel wood for households as well as fruit trees for local consumption. He supported women’s initiatives to increase their income through a cooperative system that started with a peanut cultivation project. This initiative is now expanded into the wider community and replicated by other community organizations. Through awareness programs in the schools, Daudet and his team are also engaging children to conserve the flying fox and their roosts. Most recently, he took 66 children from three primary schools around Analalava to observe the bats through binoculars, a first experience of their life.

In western Madagascar, Daudet has uncovered the link between bats and the threatened baobabs. Flying foxes are feeding on the nocturnal baobab flowers and ensuring pollination. Instead of focusing on the roost, he is promoting the conservation of the baobabs that are also emblematic species for Madagascar. In fact, these baobabs are heavily exploited by people for their fruits and bark. Fruits are consumed and bark is harvested for making ropes. In the long term, if not controlled, these exploitations might lead to the species decline and ultimately extinction. Daudet led research projects to investigate patterns of baobab harvesting, gathered all stakeholders to develop a baobab conservation strategy, and established two community-based organizations that will ensure sustainable management of two forests with high baobab density.